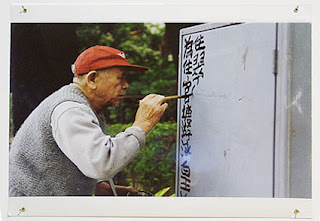 An elderly Hong Kong graffiti artist whose work has been shown at the Venice Biennial and auctioned at Sotherby's has passed away at the age of 86.

Tsang Tsou-choi aka 'The King of Kowloon' was something of a local celebrity and his writings - often incoherent, obscenity-strewn rants and ramblings about his own, supposed royal status - were a recognised part of the city's cultural landscape.

Now there are calls for the remaining examples of his unique graffiti to be preserved as part of Hong Kong's heritage.

A grubby man who looked like a tramp and who many thought barking mad, Tsang spent five decades roaming the metropolis -- often shirtless and on crutches -- scrawling his idiosyncratic calligraphy on lamp-posts, walls, phone boxes, pedestrian underpasses and electrical boxes.

"To some extent he's quite cuckoo," said leading Hong Kong fashion designer William Tang, a longtime admirer of Tsang who used the graffiti as a motif for several clothing ranges.

"I started to look at the calligraphy carefully and found it's not just a joke. It has some kind of power, which is very raw, very original," Tang added.

The police pitted themselves against the graffiti artist in a cat and mouse game for years, effacing his work wherever they found it and detaining him several times.

Tsang stubbornly kept at his task -- even on crutches in his 80s -- but was forced to retire when his legs finally gave way. 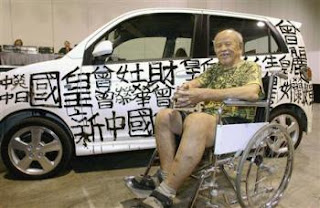 Posted by burntbreadboy at 11:56 am