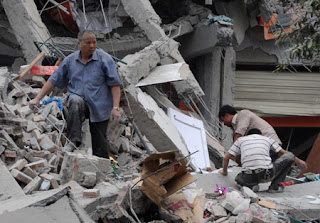 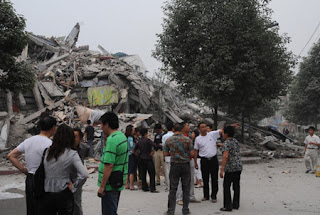 The Sichuan earthquake is already getting lots of coverage in the UK media but i thought I'd post this article from xinhuanet.com.

It's a more detailed witness account from one of the affected villages:

"We were passing by the Jushui town, and we saw a huge landslide," a man from Mianzhu City, about 60 kilometers to quake center Wenchuan, told Xinhua over the phone. He was on his way to visit a friend in Anxian county in the northeast Monday afternoon.

"Rocks buried many houses down at the foot of the hill, and some of the vehicles on the road were buried too. I saw the rear of a car and the wheels of another. Several people were crying for help and some were bleeding," he said.

A nurse at the forestry center in the Aba prefecture asked reporters to take photos of a boy with scratches on his face to help find his relatives. The nurse said his parents were suspected to have died in the quake.

Posted by burntbreadboy at 11:12 pm

For donations made in the UK , ( and Europe ) ...
as in the appeal made by the UK based Europe ''Chinese-Channel'' Broadcasting - TVBS.


or make cheques payable to

Please pass onto your other contacts.