Hakkasan decides shark's fin is too much to stomach 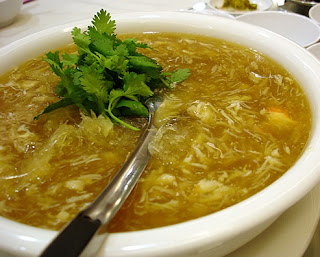 The restaurant has been serving its version of the Chinese delicacy since 2001 but decided it was time to stop after lobbying from animal rights groups. There is also a suggestion that the same groups may take their protests to Chinatown in general:

Reading some of the material on the campaign website, it's certainly hard to justify the killing of sharks purely for their fins to make soup. It does seem cruel and unnecessary, especially when you consider that the fin itself is tasteless.

However, I have to admit that I've eaten shark's fin soup and would probably still eat it if offered. For me, it's a clear case of Western sensibilities conflicting with Chinese traditions (and Chinese tradition winning).

Shark's fin soup is a dish that is almost expected at Chinese banquets (such as at weddings, for example) and whilst it looks like it will become increasingly rare in the UK and Europe, it will be hard for diners in Asia to break with this long standing tradition. Is some form of sustainable fish farming the answer?
Posted by burntbreadboy at 4:21 pm

i always think the tradition argument is null. Remember when it was tradition to buy slaves from the market? Or send poor children into coal mines to dig?

Sharks Fins soup is good but there are still many more other alternative and tasty Chinese soup which will make good substitutes.

I wonder, sre there any alternatives suitable for wedding banquets, that do not use shark's fin but are still considered appropriate?