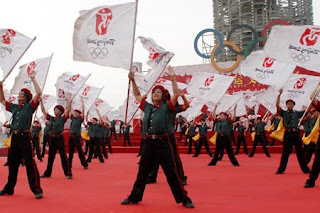 I thought this was an interesting article from The Guardian's Marina Hyde today.

I don't know if this view is common amongst the foreign media but the writer is basically saying the Beijing Games have been swamped by a particularly stage-managed form of national pride that at times verges on being forced.

I don't entirely go along with the article; I don't remember any Olympic Games being particularly full of humour, and I think you have to allow for the fact that is a ground-breaking event for China - it has never done anything like this on the world stage - so perhaps the country is entitled to indulge in national pride. Maybe after four or five events of this magnitude, China can afford to be more relaxed and irreverent.

One thing I do agree with is that London does indeed seem like the perfect 'counterpoint' to Beijing and I do look forward to a Games that is different in style and atmosphere.

And yes, some funny banners wouldn't go amiss either.

The Beijing Games are a place of steely schmaltz, where nothing goes wrong, ever... They are the place where the organising committee explained of the ordinary Chinese: "Everybody is happy. That is a fact."

It's basically like The Matrix, but with less cool clothes. And nothing makes you wish you hadn't taken the red pill like seeing volunteers, coralled into filling empty seats at a venue, unfurling a banner reading "Nothing can stop the power of China". By crikey, they need to work on their bannercraft. You just yearn for the sort of sentiment that can adorn the flags at England away games. "Don't go into labour Hayley" - that sort of thing.

For all their slick management and the great sporting display, it should be said that China's Games have been spectacularly, creepily humourless. There has been not one iota of good natured fun-poking in the national media, not a single comedy montage on the 18 state TV channels dedicated to reverential coverage of China's big moment. Nothing has been allowed to interfere with the official line. The effect is oddly static, as though the people's joy is being handed to them like a stone tablet, instead of being a democratised, roots-up explosion.

As we prepare to turn the corner into the next Olympiad, Britain is starting to look like the perfect contrasting destination for the old torch. These Games have provided in-stadia thrills, but how much richer the Olympics will be for taking place in a city of irreverence and cynicism, as well as enthusiasm...

We may not have 2,000 perfectly synchronised drummers, but we've got a nation of cussed folk dancing to their own beats.

If Beijing's Games were a state's Olympics then London's ought to be a democracy's - the chance to humanise them a bit more.

Posted by burntbreadboy at 9:01 pm

" And nothing makes you wish you hadn't taken the red pill like seeing volunteers, coralled into filling empty seats ..."

Hang on, didn't they learn this from the Hollywood Academy Awards? The organisers hire beautifully groomed and attired actors to fill in empty seats lest a camera catch the image and broadcast it to the world and thereby shatter illusions.

Heaven forfend that China should learn a good trick from the US.

To me China did a stellar job and London's handover was a huge embarassment and so unprofessional and unorganised. Who wants to see a bunch of drama students prancing around? Who cares about Leona Lewis or that plank, David Beckham. And the strategic placement of black, white, asian and disabled people was to me a cynical way so show how "diverse" the UK is