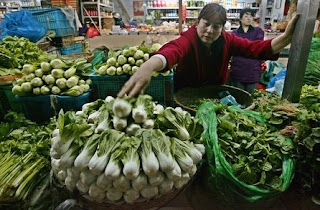 China's tainted milk scandal has been covered so extensively in the international press that I didn't even think it was even necessary to mention it on the bbc blog.

Clearly the scandal had exposed the fact that as China's economy has expanded at an explosive rate, its quality control standards have simply failed to keep pace (something that I think most Chinese would have acknowledged even before the melamine scandal).

In this case, those who paid the price were the country's most vulnerable citizens - infants being fed milk.

Today there was disturbing news that suggests the scandal is not over yet: Singapore's Straits Times and Yahoo News have both reported that the toxic chemical melamine has been discovered in vegetables imported from China.

The findings apparently originate from Korea, and has led to a state of high alert in Malaysia:

"We have learnt from Korea that they have detected a high level of melamine in vegetables they import from China," said Health Minister Datuk Liow Tiong Lai.

It may take a while before this news is confirmed or debunked. In the meantime, here are the links:

Posted by burntbreadboy at 10:11 pm

‘Quality Control Standards’ usually involve a self regulatory system of checks and controls, verified by independent regulatory bodies and supported by legislation.
The adding of melamine to milk powder to increase the protein readings is an act that blatantly puts profit above all other considerations.
Which of the three words ‘quality’, ‘control’ and ‘standard’ was applicable?

China (and other developing countries) should look long and hard at what price it is willing to pay in order to keep ‘expanding its economy’ at the current rate.

Interestingly, many who have lived through the Communist era have noted that while life was considered ‘hard’ then, at least there were quality control standards in place which ensured that willful poisoning of food did not happen.