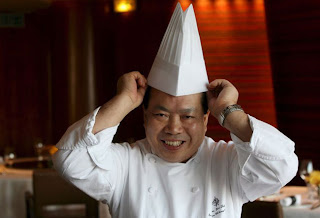 The Michelin Guide is probably the world's most highly regarded restaurant guide and chefs all over the world dedicate their lives to winning the organization's coveted stars.

For the first time in its 108 year history, the Michelin Guide now covers Hong Kong and Macau the honour of being the first Chinese chef to be awarded the maximum three stars has been won by Chan Yan Tak of the Four Seasons Hotel, Hong Kong.

His restaurant, Lung King Heen now joins the list of only 72 in the world that have three Michelin stars and 26 of those are in France. Inspectors visited Lung King Heen 12 times before deciding its rating.

This is still some debate as to whether a European guide can accurately judge Asian cuisine. Whilst Michelin released its first guide to Japan a year ago and has denied any bias towards any type of cuisine, critics have said that the Michelin inspectors favour French style cooking and are less willing to award its highest rating to restaurants serving other cuisines. American restauranteurs in particular have been critical of the apparent bias towards French restaurants in the Michelin Guide to American cities.

I'd certainly love to try Lung King Heen on my next visit to HK but I wonder how many other deserving Chinese restaurants are out there that serve amazing, authentic, faultless Chinese food but which perhaps didn't appeal to the Michelin inspectors' European sensibilities?

If you've already dined at Lung King Heen, well done: It will probably be ridiculously difficult to get a table there now.

You can check out the hotel's official website here and below is Chan Yan Tak's tasting menu.

Posted by burntbreadboy at 10:18 pm

I'm sorry, not to be a snob or anything, but whilst I have every faith in Michelin to rate restaurants that serve French or "Modern European" cuisine, I really don't think I will ever totally agree with Westerners on what is a really great Chinese meal. The S.Pellegrion "World's 50 Best Restaurants" consistently includes Hakkasan in its list. Enough said???

Not agreeing with a Westerner's perception of what constitutes a great Chinese meal has nothing to do with snobbery!

On the same side of the coin, I totally agree with you that Hakkasan is pretty crap.

Real good Chinese food is fresh, fast, easy if you ask me! I can see this why this menu would appeal to Michelin stars though.

Reminds me of the episode of Gordon Ramsays show where he had Gok Wan on and they had to cook a bowl of won ton noodles. Goks looked pretty authentic, Gordon's had all this rubbish in it, coriander etc. etc. and the testers choose Gordon's of course!

I agree... in order to really rate food you need to be able to benchmark it against other food and competitors in the same category. And I honestly doubt a Western Michelin rater has eaten enough Chinese food growing up to be able to rate it effectively.