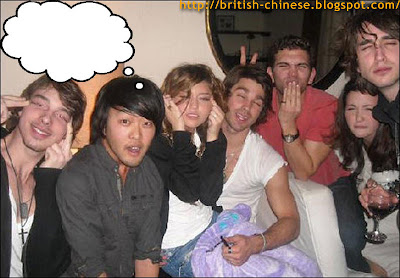 Some of you probably saw the headline and are thinking, 'Who?' and some of you are probably thinking 'Who cares?'

The young star's actions were strongly criticised by the Organization of Chinese Americans and the photo may upset the clean-cut celebrity's Asian fanbase.

As for me, I'm going to reserve judgment and say it depends on the context of the photo.

There is an Asian guy posing with them and whilst that doesn't automatically prove the people aren't being racist it does make it highly plausible that this was an intentional joke between friends. I think it's an open verdict.

Posted by burntbreadboy at 10:52 pm

Looks like the Chinese guy is "rounding up" his eyes. Is that racism too?