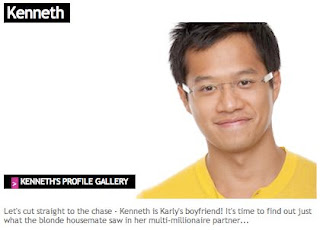 They've had a one-armed, lesbian Cockney, a Portugese transsexual and a black albino American rapper. But surely Big Brother has gone too far this time? For the first time in 10 years of the show, they have put a straight, Chinese man in the house.

Yes, you read that correctly: New housemate Kenneth Tong (a millionaire who divides his time between Hong Kong, Scotland and New York) is Chinese, is not mixed race, isn't gay and he is on national television. Whatever next?

Posted by burntbreadboy at 8:57 am

Who cares about alleged unpaid utility bills? He's good looking and Chinese. And straight.
Certainly the three things I look for in a man.

They may have picked a straight Chinese man but Kenneth is one of the biggest arseholes that has ever been on Big Brother - I don't see how he is in any way a good figure for Chinese people!!!