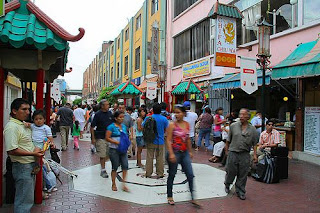 Photo: diariodelviajero
It won't be a surprise to any bbc that Chinese communities can be found in some pretty far flung corners of the world. But how about Lima, Peru?

It turns out that Peru has a large Chinese-descended population and the capital even has its own Chinatown. In fact, the Chinatowns of Lima and Havana, Cuba, were the first to be established in the Western hemisphere thanks to the influx of Chinese workers who accompanied the Spanish colonists who settled in the region.

Check out this intriguing profile of San Joy Lao, one of the most popular restaurants on the 'barrio chino'. How strange is it to see Cantonese being spoken on a street in Peru? :)

Posted by burntbreadboy at 1:07 am

totally surreal, I've been to Lima and could not believe my eyes when we stumbled into what looked like chinatown, turned out our Inca Trail guide loves stir fried rice!