Truly awful news; A tour group including 22 Hong Kong citizens was caught up in an hostage drama in Manila. Tragically 7 people have been confirmed dead in the ensuing shoot-out. No information as yet on whether the Hong Kong tourists were amongst the casualties.

UPDATE: Video of the incident shows what must be one of the most incompetent police operations of recent times. It is being reported that officers took 45 mins to break their way into the bus after the first shots were heard. 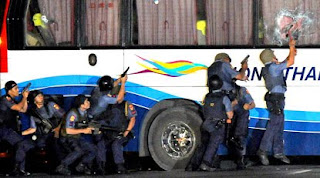 Posted by burntbreadboy at 4:43 pm