This is a slightly different and more complicated Side-by-Side and has taken quite a bit longer to put together.

As a bbc who has lived most of his life in London and spent some time in HK, I am fairly familiar with the geography of both places (more so with London than with HK). What I didn't have was any sense of how one place related to the other in terms of scale and distance.

For example, that train ride from Kowloon to the New Territories seems like a long journey but is it? What would be the equivalent journey in London? How big an area is Central, when compared to London? People often think of Hong Kong as a small place, yet it never feels small when you are there. So how big or small is it, really?

I thought it would be interesting to use Google Maps to shed some light on this. The key was getting the maps of both Hong Kong and London at the same scale. Differences in global maps mean that Google does not display all locations at precisely the same scale on the same screen (there may be some trick to doing this but I don't know what it is). What I had to do was view both maps separately at roughly the same scale, screengrab these views and then in Photoshop resize the images more accurately using the on-screen scale key to ensure that 1km on the Hong Kong map was the same (as near as possible with the naked eye) as 1km on the London map. Once I'd done that, it meant I could compare them visually:

No doubt an expert would have been able to do this more accurately but I got some interesting observations from this crude experiment.

For example, the whole of Hong Kong, including the massive Lantau Island, just about fits within the M25. 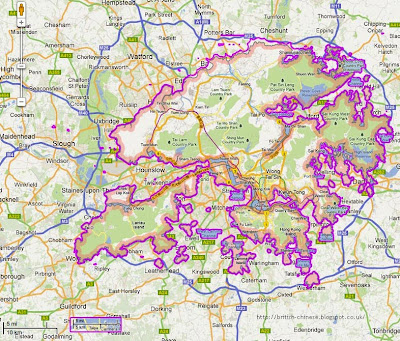 If you line up the southern tip of Kowloon to London's Embankment, Mong Kok and Prince Edward are roughly where Kings Cross is. I never realised that distance was so great. It's just a couple of MTR stops, right? 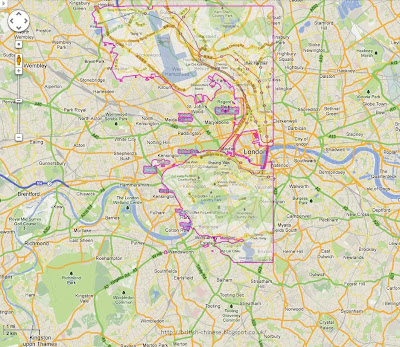 If you place Sheung Wan MTR station (over in west HK island) on top of Marble Arch, you can see that the distance to Heng Fa Chuen in the east is roughly the same as Marble Arch to Poplar, way out in the East End. An epic journey by London standards. 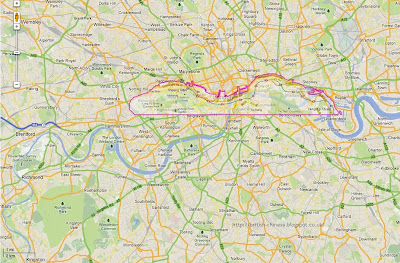 If you line up Hong Kong's Central with Oxford Circus in London, Admiralty is roughly in the middle of Shaftesbury Avenue. 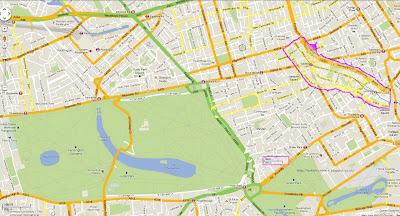 The TST area up to Jordan is very approximately the same size as the Mayfair area in London, from Bond Street down to Piccadilly 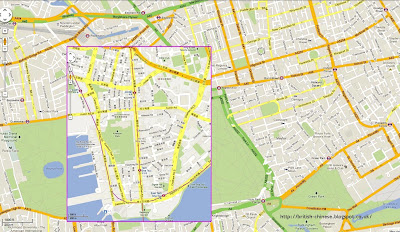 And to answer the question I initially asked: A journey from Hung Hom interchange to Tai Po Market in the New Territories is very roughly the same as the journey from Paddington to Uxbridge, give or take a few metres.

Hope that's been of interest, and do drop me a line with any other geographical Hong Kong and UK comparisons!
Posted by burntbreadboy at 3:22 pm

Wow, this is really interesting - it must have taken you ages! I never really consider places like this, but when it's laid out in front of you it makes you think. I'm from London myself but last year I stayed in a Hong Kong serviced apartment for a couple of weeks. Travelling around always seemed so much further and felt like it took longer than hopping on the trains around London. But this tells me otherwise. I guess maybe when you live somewhere you go into autopilot when you're travelling around so don't notice the time scale so much. Anyway, I'm really impressed with this, thanks :)