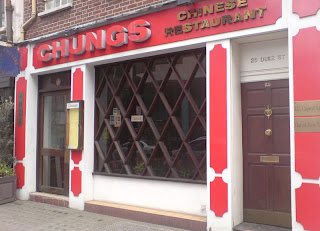 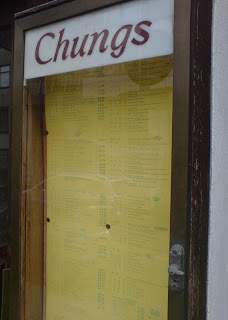 Have you ever come across a Chinese takeaway or restaurant that looks like it hasn't changed since the day it opened - probably decades ago?

I like places like this. They have a sense of age and endurance. They are survivors in a world of ever-changing shop fronts and constant re-vamping. They also stir up feelings of nostalgia and memories of the takeaways I knew as a child. From the plastic, laminate counter to the scuffed, grubby lino flooring; Multi-coloured plastic strips in the doorway and cans of coke stacked up in 3s.

I happened to pass this restaurant at the weekend and thought I'd start a 'frozen in time' series on the bbc blog. It's on Duke Street, Mayfair, right next to London's hottest department store Selfridges, in probably one of the ciy's most sought after locations. No idea what the food is like but the fact that it's still here must be a testament to its popularity.

If you see any other 'frozen in time' Chinese establishments, drop me a line!
Posted by burntbreadboy at 9:59 am

Is it near Chinatown?

It's great to be able to see London through the eyes of the local people there.

Hey Taiko, no this one isn't in Chinatown - it's quite a way away in London's main shopping area. I've seen a few of these 'frozen in time' places all around London though.