Northern Ireland gets a Chinese MP 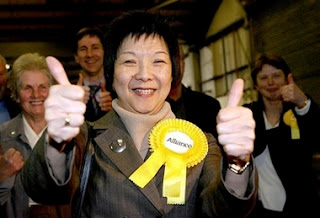 In a region known in the past for religious conflict and sectarianism, a new political figure has emerged whose success may be partly due to the fact that she is not tied to either Catholicism or Protestantism - 56yr old Anna Lo.

Lo, who was born in Hong Kong and has lived in Belfast for 32 years, has allegiance to neither Protestant nor Catholic. “I’m a Taoist, not a Christian and I don’t naturally belong to orange or green,” said Lo...

Northern Ireland once prided itself on being a non-racist society but Lo claimed “there was always racism in Northern Ireland. It is just that the troubles overshadowed it and the media didn’t report it so much”.

She recalled: “In the late 1970s I was kicked in the street. That was in broad daylight. I was walking home from the BBC to get the bus at Belfast City Hall and four or five youths walked towards me shouting abuse and I walked away from them on the pavement. When they kicked me they were jumping up and down and laughing.”

Posted by burntbreadboy at 10:27 am

Racisms are everywhere. I hope things will improve.