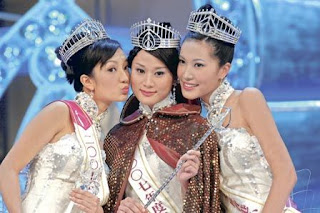 The 2007 Miss Hong Kong has been criticized for not being beautiful enough.

Kayi Cheung, a Hong Kong born, Vancouver-based student whose family is described in the press as being "from the housing projects" won the coveted award but she was apparently booed during the ceremony.

Commentators have harshly criticized her looks whilst admitting her character and personality were more appealing than those of some of the other contestants.

National beauty pageants still take place here the UK but they are seen as out-dated and demeaning to women and have a much lower media profile than they used to. In Hong Kong, however, they are still prime-time entertainment and the subject of heated debate.

After winning the crown, Kayi attended the post celebration event and press conference. Afterwards, she went to a relative's home to continue celebrating with her family. Kayi's mother prepared fried rice and rice-bean congee for her beloved daughter.

Returning home, Kayi's neighbors congratulated her and said, "We also have a Miss Hong Kong from the housing projects!"

... In reaction to the harsh public reaction, Kayi said, "People have a different perspective on beauty. There will always be supporters versus dissenters towards various participants in a beauty pageant. The winner is selected by the judges. It is most important that I am the judges' winner." (Some people criticize that you are from the housing projects?) "I don't mind as long as it is comfortable to live in."

Posted by burntbreadboy at 8:20 pm