What would the 'Dragons Den' lot have made of this? 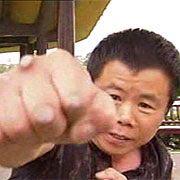 Things are never quite the same in China. That goes for eccentric inventors who hit the big time too. Britain has Reggae Reggae Sauce, China has 'The Highly Effective Fly Slaying Machine.'

Like a kung fu master with lightning reflexes, Mr Hu could literally pluck flies out of the air with his hands - sometimes five at a time. But Mr Hu decided that his war against the flies should go high-tech.

At the drawing board, he worked over a design for the ultimate weapon - a fly slaying machine. Six months later it was on the production line.

It is a curious contraption - a slowly revolving circular drum containing sugar and water attracts the flies and deposits them in a clear plastic tank.

"It's like a nightclub for flies," said Mr Hu. "They just party themselves to death."

Posted by burntbreadboy at 9:59 am

But, most importantly, where can I buy it?