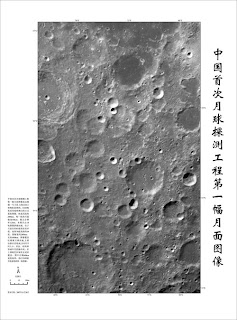 Photo: CNSA
China's space programme has just, well, got off the ground and already it is generating its own conspiracy theories! Knowing the Communist Party's love of 'information management' it's not surprising that people are a bit suspicious.

I have to admit I found it strange how China's first manned mission had very few supporting photographs. All I ever saw were photos of the astronaut, Lt. Col Yang Liwei, clambering out of his spacecraft in a field. So far I haven't been able to track down a single image of him actually in orbit, which is a little odd.

When China recently unveiled the first image taken by its Chang'e lunar probe, there were some who alleged that it was a fake or rather a plagiarized version of a NASA photograph taken many years earlier.

This was, the conspiracy theorists alleged, the ultimate act of piracy. Yes, those pesky Chinese pirates had been at it again!

However, the theory has been more or less killed off by a side-by-side comparison of the two images which show that the lighting is different and an extra crater in the newer, Chinese photo.

That should at least keep the conspiracy theorists quiet. Until China's next space mission, anyway.

Posted by burntbreadboy at 10:55 am