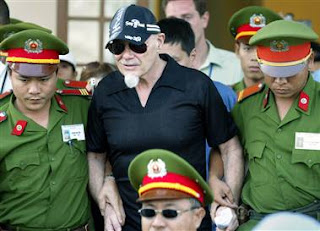 Unconfirmed reports in the UK media claim that the disgraced former singer and convicted child abuser Paul Gadd aka Gary Glitter is considering settling in Hong Kong when/if he is released from prison in Vietnam.

The report states that he intends to make use of Hong Kong's lack of an official sex offenders' register to lead a 'low profile' life.

Hate to burst your bubble there Mr. Glitter but I suspect and hope that a former international celebrity who is now a known pedophile (and therefore a danger to any local children) arriving in Hong Kong might be quite a newsworthy story and you may well be followed every step you take outside of your hiding place.

The report has since been denied by Gadd's legal team so we can't be sure how true it is.

However, if it runs out to be true, I sincerely hope the Hong Kong government do not allow this despicable low life to settle in the territory.

Posted by burntbreadboy at 1:12 pm