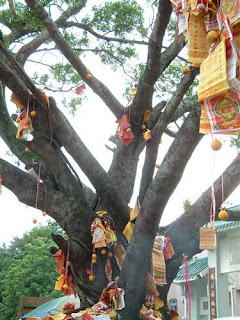 Photo: rosher
In an incident straight out of an Old Master Q comic, a 62 year-old man is suing the government for injuries caused by a branch that fell from Tai Po's famous 'wishing tree'.

Choi Kam-yin sustained injuries to his leg, whilst a young child was also injured by the branch.

"According to the family, Choi had been so badly injured that he had to receive several operations and physiotherapy.

The family also accused the department of being callous as it did not send any staff to check the patient's condition. The department only sent a representative to see Choi after the incident came to light.

The ailing Tai Po Wishing Tree, its branches heavy with wishes tied to oranges, had caused concern among government officials who announced it was to be protected."

Source: The Standard, and first sighted at Hong Kong or Bust.

The big question that needs answering is: Was someone else at the time wishing that a branch would fall from the tree and hit Mr. Choi?

If that was the case then it would certainly prove the wishing tree's credentials. The government should investigate further I think!

Posted by burntbreadboy at 6:45 pm