China clamps down in Tibet. How long can this go on? 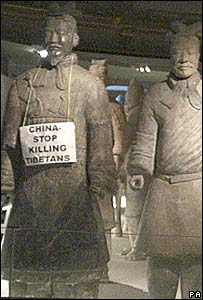 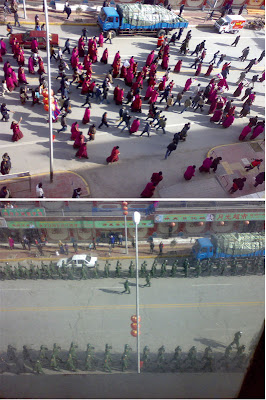 Apologies for the lack of updates but I've been a little busy with work recently.

I'm sure you will have seen the recent news about the protests and violence in Lhasa, Tibet which started on the 49th anniversary of a failed uprising against Communist rule.

The protests are reported to have led to a number of civilian deaths (16 according to Chinese authorities, 100 according to Tibetan exiles monitoring the protests). It seems likely that some Han Chinese citizens have been attacked by Tibetans, and that the Chinese authorities have used force against the Tibetans although reliable figures are never easy to come by in these situations.

There are now reports that protests are spreading beyond Lhasa and that in response military personnel and equipment are being drafted in by the authorities.

Meanwhile British Prime Minister Gordon Brown has made his stance clear by agreeing to meet the Dalai Lama when he visits the UK.


I think amongst bbcs you will find differing opinions on the issue of Tibet. I may be in a minority but I actually agree with calls for Tibet to be granted autonomy or even full independence.

I find it difficult to understand how any Chinese official can legitimately say to Tibetans that their homeland is part of China whether they like it or not.

The anti-independence arguments that I have read all seem incredibly flimsy and irrelevant. They cite historical claims of sovereignty over the territory and fears that granting Tibet independence would incite other territories to do the same. To which my honest answer is, 'So what?'

I think that when the population of part of a country consistently calls for independence, the worst thing a government can do is to use force to suppress those calls. It seems to me much more sensible and practical to start a dialogue and be willing to make some concessions. Why?

Because suppressing the will of the Tibetans with force is counterproductive. It uses up the state's resources needlessly, creates resentment, violence and aggression, and it clearly shows China as an oppressive, dictatorial state in the eyes the world. So really, why bother?

I think it would actually serve China's interests to grant Tibet a degree of autonomy and end this policy of forced integration. If other territories want to follow suit, then let them enter negotiations too.

A smaller, united China is far better than a larger, divided one in my opinion.

At the moment Tibet is a lose-lose situation for China and I hope it isn't long before a new, peaceful approach is tried in solving the Tibet problem.

Posted by burntbreadboy at 1:42 pm

Thanks for a simple and intelligent analysis of the situation.

This is a simple and naive analysis.

There are 56 ethnic groups in China, if all these groups wants to have their own country then there won't be a China anymore.

Anytime someone/group want something from the chinese govern't then all they needed to do is go around kill some Han and Hui civilians and they will get it. that is just not acceptable for China or any country.

You live in Britain, right? Why doesn't your country allow Northern Ireland and Falkland go?

The violence didn't spontaneously erupt for no reason. It is the result of decades resentment caused by China's policy in the region. You have to look at the root cause of the problem.

Britain has not 'allow go' (sic) Northern Ireland and the Falklands because the people living in those areas have not demanded it. If they did, I don't think the government would respond in the way that China has. There have been calls for independence from Scotland and Wales - moderate calls nowhere near the strength of those in Tibet - and the UK government responded sensibly and reasonably: Scotland now has it's own parliament and Wales has it's own law-making assembly.

It is somewhat crazy to think granting Tibet independence will cause every ethnic group in China to 'want their own country'. Most of China's inhabitants are perfectly happy to be part of newly prosperous China and know that it is in their own interests.

As I posted, I think a smaller, united China is preferable to a larger, divided one.

The reason why Northern Ireland can't become independent is that after centuries of Scottish and English migration to there - the Irish catholics have become a minority.

Maybe after more decades of Chinese migration, it too will become impossible for Tibet to become independent.

As usual all China cares about is face and not giving in. China is the big bully, and Tibetans have every right to protest and raise awareness to their cause.

China does not need to 'give in' but ask what are their true reasons for holding on to Tibet like this, apart from pride.

They are not doing themselves any favours, especially with the precious Olympics coming.

you may find it interesting to watch these youtube videos

always good to hear both sides of the story

"always good to hear both sides of the story"

That's an interesting comment because I seriously doubt people in Tibet or most people in China get to hear "both sides of the story".

Take Outer Mongolia for example, its more poor than the Mongolia in china. They want to be a part of china again. (Will the same happen with Tibet?) After there 'free' will they want to be apart of China again? You will automatically say 'no' but think about it...

In all seriousness even if Tibet was an independent country what do you think would happen?

There economy would be so low the country would be very poor I’m not sure where a lot of there food would come from because how would they import? They would have to reply on aid from other countries.

China is doing a lot to develop the Tibet region.
Tibetan education is poor - so ethnic Tibetans, along with other minorities, are allowed into university with lower scores than ethnic Han Chinese to boost their chances. If they were not apart of China there education would be pretty much nonexistent

I think a lot of British born Chinese + westerners do not understand the situation. Without knowing China's side it is unfair to pass judgement.

-马克 (same as the Anonymous with the video links)

By way of balance, you can find views from the other side of the argument here: