New book on the Battle of Hong Kong published 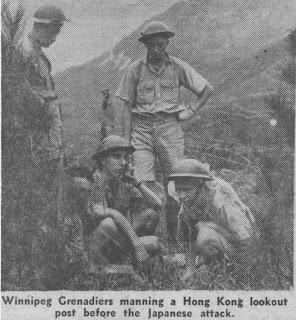 I received an email yesterday from Ronald C. Parker, the son of a Battle of Hong Kong war veteran, who spotted my post about the battle on the bbc blog.

He has just completed a book about the conflict, told from the point of view of his father's Canadian rifle company which fought in the battle.

On December 8th, 1941, hours after the Japanese attacked Pearl Harbor, they launched an air attack on the British Crown Colony of Hong Kong.

For the first time the saga is told from a Canadian perspective, using the words of those soldiers who fought that, long ago, almost forgotten battle.

Some 50,000 battle-tested Japanese soldiers stood poised on the mainland waiting to storm Fortress Hong Kong. It was defended by 15,000 inexperienced British, Indian, and local militia troops , along with Canadian soldiers from The Royal Rifles of Canada and The Winnipeg Grenadiers. This is their story.

Follow this link to http://www.lulu.com/content/561522 to purchase the book - a rare opportunity to learn more about this little discussed episode of WW2 and a part of Hong Kong's history that many bbcs are unaware of.
Posted by burntbreadboy at 1:44 pm

I have read this book and found it gave a factual account of the battle of hong kong. My daughter used it to write an essay for school about the war. She got an A.