Did you know the next Pixar film stars an Asian character? 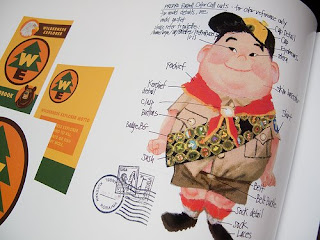 Photo: Parkerblogs
You may have already seen the trailers for 'Up', the latest wonderful-looking film from the makers of Finding Nemo and Toy Story.

What I hadn't realised until now was that 'Russell', the funny little kid who stars in the film (alongside the grumpy old man) is actually an Asian American boy.

As reported by Slashfilm, the character of the boy was based on by an Asian animator who works for Pixar but his ethnicity has not been made a big deal of. He's just a cute, funny little kid who happens to be Asian.

I often post about depictions of East Asian people in the media but do think it's an important issue (in particular for younger generations). I know that were I a 10-year-old boy going to see Up, knowing that the main character was Asian would simply have made my day.

Posted by burntbreadboy at 6:30 pm

Hmmmm.....but he's fat and has the sterotypical slanted eyes?

hes modeled after a real person!

those eyes are not even stereotypical, it took me a while to even notice he was asian bc he didnt reflect any stereotypes. bravo to pixar!