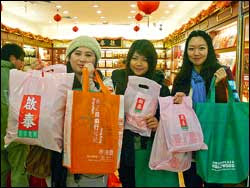 Not long ago, traveling to Shenzhen was a popular excursion for Hong Kongers wanting cheap deals on goods and services. The region became a synonymous with 'bargain' and some Hong Kongers even relocated there to take advantage of lower property prices and living costs.

But now inflation on the mainland plus the rising value of the yuan against the Hong Kong dollar mean prices are now often lower in the SAR.

The flow of shopping tourists is starting to flow the other way, with excursions from Shenzhen to Hong Kong rapidly increasing - especially in the run up to Chinese New Year. Shoppers are not just after luxury or one-off purchases. Even daily food shopping works out roughly 20-30% cheaper in HK. As the Hong Kong Standard describes:

In less than 30 minutes, her shopping bag was full with dried seafood bought for more than HK$1,000.

Looks like the days of cheap shopping trips to Shenzhen are over... for now, at least!

Story: Mainlanders bus to HK in blitz on malls

Posted by burntbreadboy at 10:48 am