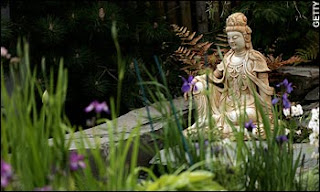 We all know that aspects of Asian culture are often appropriated by the West in a kind of 'pick n' mix' fashion depending on the fashion of the time: A little bit of Chinese medicine here, a little bit of Japan pop culture there, the occasional Chinese character tattoo... well, anywhere. I don't think there's anything wrong with this. After all the same thing happens in reverse, with Eastern societies borrowing heavily from the West - sometimes with unintended results.

British papers have been reporting one case of a Western interpretation of an aspect of Asian life that went a little bit wrong. An exhibitor at the world-famous Chelsea Flower Show wanted to give their display a touch of feng shui harmony. But their attempt was seized upon by a group of Chinese students who pointed out a number of mistakes such as a dragon that was pointing north instead of east (I must go and check on my dragons now) and a statue of the deity Quan Yin that was placed disrespectfully close to the ground and mis-labeled as Buddha.

The story may have been blown up somewhat by the press, but I do think it's a lot of fuss over something fairly minor. For every mis-aligned dragon, there is a Hong Konger who has given themselves an unintentionally ridiculous English nickname ('Pineapple', anyone?) and I've no doubt that similar mistakes are occurring regularly in China when Western history and culture are being 'interpreted' for decorative purposes. The case of the Hong Kong clothing store that was decorated in a 'Nazi' theme a few years ago comes to mind.

As if to prove the point, on the night before this story broke, a programme aired on British TV showing comedian Paul Merton touring China and one of the featured items was a bizarre, 50 million dollar, faux-European hotel that had the approximate look of European grandeur but none of the right details. "What do you say to a man who’s just wasted $50 million?" he wondered when he was introduced to the owner.

Had the Chelsea exhibit been an actual religious shrine, then the students would have had a point but as it wasn't, I think we will just have to expect that we get crossed wires every now and again. For us all to be as confused as each other has a nice sense of harmony to it, I think.
Posted by burntbreadboy at 11:05 pm

Email ThisBlogThis!Share to TwitterShare to FacebookShare to Pinterest
Labels: lifestyle

I think Aussies are more knowledgeable on Fengshui than Britons.

Fengshui is big business in Australia according to a news report from Singapore. We're amazed to know that property developers often solicit advises from fengshui expert or applies fengshui elements on housing.

Hi there Taiko, yes I'm a member on both of those but I don't really post much.

I think your validation email may have gone into your Junk/Bulk Mail folder. That's what happened to mine.