Korean family in U.S. is being sued for $67 million dollars for losing ONE pair of trousers 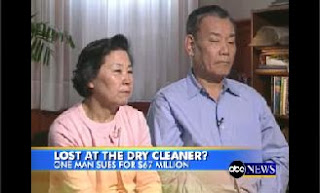 A quite bizarre story from the States.

In 2005 a Washington judge named Roy Pearson took a pair of trousers to a dry cleaners run by a Korean family - Jin and Soo Chung and their son.

Somehow the trousers went missing, which apparently cause the judge some distress as he planned to wear them on his first day in court. The cleaners agreed to compensate the judge, eventually offering the huge sum of $12,000 to make up for the loss.

However, for reasons that aren't very clear, the judge refused to accept the offer and has instead pursued legal action claiming damages not just for the loss of his trousers but also for the cost of renting a car to take his cleaning to another company every weekend for the next TEN YEARS and the mental distress he as suffered PER DAY since the trousers went missing.

As a result, his claim for compensation now stands at 67 million - yes, million - dollars.

Oh yes, and the cleaners say they have actually FOUND his missing trousers but he is refusing to accept them. 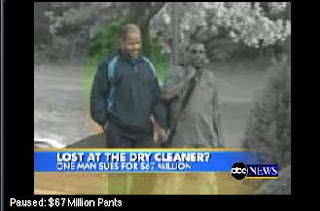 The trial is set for June but the case must surely be thrown out? It is little more than malicious abuse of the Chung family.