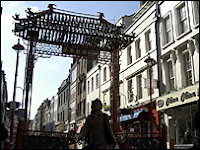 Like many bbcs, my only experience of Chinatown is as a place to eat and buy Chinese groceries. But the exotic nature of Chinatown, and the sense that it is outside and apart from normal life has a darker flip-side, too. It emerged last week that Chinatown is a hub for class A drug dealing in the central London and Soho areas.

In a special police operation 32 people were arrested in the Gerrard Street - the centre of Chinatown. 16 were kept in custody.

It should be pointed out that although the raids took place in Chinatown those arrested were not thought to be from the local community but just went to the area to sell and buy drugs (BBC report.)

Another article about the raid here.

It makes me wonder if incidents like this make Oriental City's claim to be 'the real Chinatown' more significant, since I don't think any such illegal activity has been attracted to that soon-to-be redeveloped shopping mall.
Posted by burntbreadboy at 4:06 pm