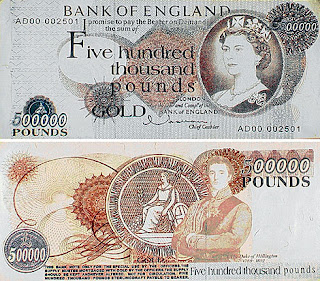 A number of Chinese individuals have been named in a court case concerning a failed attempt to con the Bank of England out of billions of pounds.

It is not clear what role - if any - the Chinese individuals played or how they got involved, but reports seem to say that the main fraudster Ross Cowie (who reportedly describes himself as an Australian lawyer) was trying to convince the Bank of England that he represented a Chinese clan who had in their possession a number of 500000 pound and 1000 pound notes and that he wanted to exchange them for smaller denomination notes.

Sound plausible? There was a slight flaw in the plan: The Bank of England knew that it had never issued any 500000 pound notes and also 1000 pound notes ceased to be legal tender 60 years ago.

The case is still ongoing and of course all the individuals concerned are innocent until proven guilty. Whatever the result of the case, it sounds like there is an interesting story to be told!

Posted by burntbreadboy at 8:30 pm