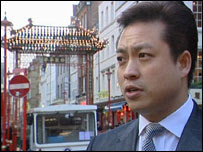 A BBC South East reporter has infiltrated a group of Chinese immigrants and uncovered what is alleged to be a pirate DVD selling operation that is closely linked with people smuggling from China. Furthermore, a main player in the operation is said to be He Jia-Jin, who was previously the Vice-Chairman of the London Chinatown Chinese Association.

He Jia-Jin is said to be linked to properties that were used to house the smuggled immigrants (allegedly up to 18 in one house). He is currently standing trial in Hong Kong for money laundering offences and has been arrested in the past in relation to people smuggling offences.

In 2004, Mr. He's assets were frozen by the British authorities investigating his activities. This prevented £14,000 that he had raised from the Chinese community for the families of the deceased Morecambe Bay cockle pickers from being sent to China (Source: The Times)

People smuggling is a lucrative criminal activity that burdens the smuggled immigrants with huge debts that are often enforced with threats of violence against relatives back home.

It's something that's been mentioned on this blog before but I think this shows that (as with many parts of London) behind the surface appearance of Chinatown there are murky goings on that the average tourist or restaurant diner has no idea about.

Posted by burntbreadboy at 9:36 am

I really suggest you re-read the original BBC report and consider re-writing your post here, which is certainly libellous. You've taken things to far. The BBC report, on the other hand, is composed only of the facts. His assets weren't frozen by the British authorities 'investigating his activities' at all. A government agency is trying to obtain money, but as one newspaper report online reveals, this is without He being found guilty or even charged of any wrongdoing.

The paragraph about the frozen assets has nothing to do with the BBC article - it is taken from a Times article and the link was posted quite clearly.

As the Times article has been online since 2004, I'm assuming it is not libelous but of course I would remove it from my post if it turned out to be inaccurate.

Again, I recommend that you revisit this post. You have made several allegations regarding He Jia-Jin which the original articles did not. Consequently you are guilty of defamation.

And by the way, the Times article isn't the issue. The problem is your interpretation and gross over-simplication of those reports.

I know this blog is old but it is not true and the allegations are not true and they have never been true, bbc indirectly linked jia jin he to things which he has no involvement in. I should know, Hes my dad.