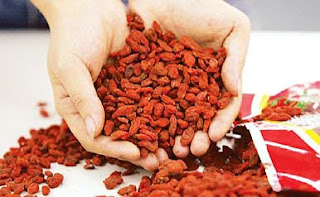 Photo: sohu.com
It's quite strange to see a food item I grew up with and ate as part of my mum's traditional Chinese soup suddenly become an ultra-trendy, ultra-healthy 'superfood' beloved of celebrities and fitness freaks.

Go ji are the instantly recognisable ingredient in homemade, Chinese soups. We boil them so that their goodness goes into the soup and the berry becomes soft, sweet and mushy. Re-hydrated after cooking, the berries become fat and bright orange unlike the dry variety on sale in western shops.

Now, go ji are being hailed as something akin to a miracle food in the west. As this BBC report says,

"they're supposed to contain, weight for weight, more:

• vitamin C than oranges
• beta-carotene than carrots
• iron than steak

But there's no messy peel, and the berries are so light that a "daily serving" is just 10-30 grams.

The hype machine calls them "fruit Viagra", "cellulite-busting" and claims one pack will have you "jumping for joy".

A more sober scientific explanation says the beta-carotene in the fruit is thought to help fight heart disease, defend against cancer and protect skin from sun-damage. The berries are a good source of B vitamins and anti-oxidants - which may help protect against the fallout from chemical reactions in the body."

I like a bowl of Chinese soup every now and then but I can't say if it makes me 'jump or joy'. Nice to know that western doctors are in agreement that the berries are good for me, though.

What next? Nell MacAndrew appearing on TV telling us not to eat so many crisps because they're 'yit hay'? :)

Posted by burntbreadboy at 7:40 pm

It's funny how loads of things like this are now coming into the western conciousness! I've just started an online chinese supermarket and a large number of orders are of people bulk-buying things like goji berries and pu'erh tea!
I just don't understand how the western super-foods hype-machine works? Will they be moving onto another country in the future? I hope not, as the sales are still welcome!