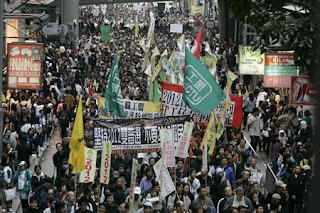 Photo: Reuters
There was another pro-democracy march in HK today. This time it was in response to the announcement by China that Hong Kongers shouldn't expect full democracy for another ten years at least

Last month China decided to delay the introduction of full democracy in Hong Kong from 2012 to 2017, with elections of the entire legislative council potentially stalled until 2020.

The reason given was (reportedly) that the people of Hong Kong lacked the political maturity to cope with democracy - they are simply not ready. The protest was aimed at proving this wrong.

"Hong Kong's democratic development has been too slow, we want it to be faster," said protester Irene Wong, who works in the financial sector and marched with several friends.

"Analysts say Beijing fears that a move to unhindered democracy could spark the same demand on the Chinese mainland and fuel social unrest in the country."

I think that's actually the real issue here: Beijing knows, I think, that Hong Kong is ready and able to cope with democracy. It's the rest of China that they're worried about, and how it can hold back or deal with demands for democracy right across the country.