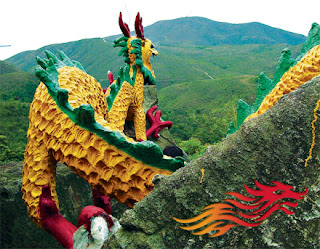 As Dragon Boat season draws near, Hong Kong's BC magazine describes the huge number of dragon 'sightings' in Hong Kong.

Not the real, fire-breathing variety but the more poetic, symbolic type. From street names to movie titles, Hong Kong undoubtedly has more dragons per square metre than anywhere else on earth.

For instance, a small island off Clear Water Bay, largely uninhabited these days but whose 300-year-old fort and prehistoric stone carvings attest to long periods of human occupancy, is referred to by Cantonese speakers as Tung Lung Chau or Tung Lung To, both of which translate as Eastern Dragon Island. Or you might know it as Nam Tong Island.

Still, it’s in the hills of Hong Kong that people are most likely to see dragons. On Hong Kong Island, a hilly ridge that runs parallel to Shek O Road above Big Wave Bay (Tai Long Wan) and Shek O village has been named the Dragon’s Back (Lung Chek) because its appearance conjures up visions of a dragon at rest. Yet it would have to be one of the more friendly types of dragon – the ridge is very popular with hikers and hang gliders, the undulating trail along it makes for a scenic walk voted the Best Urban Hike in Asia by TIME magazine a few years ago.

On, and it has a nice explanation of how Kowloon got it's name, too.

Posted by burntbreadboy at 11:42 pm