It's an anniversary today 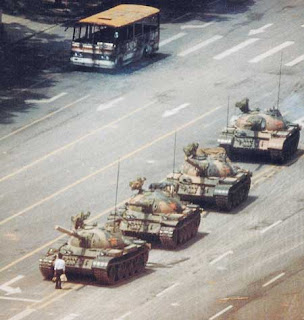 It was eighteen years ago - June 6th 1989 - that the world was stunned to witness the events of Tiananmen Square. What appeared to be a bright, new dawn of people power in China turned into a chaotic and bloody military action against unarmed civilians. It also unofficially signaled the birth of New China, where financial freedoms were offered to citizens in return for their tolerance of the political status quo.

Today, China's priorities are managing its ballooning but unsteady economy (a stock market tumble is dominating the financial pages today) and ensuring that the upcoming Olympics - China's golden opportunity to showcase itself to the world - go off without a hitch. Reminders about the events of Tiananmen Square - pivotal though they were - are therefore not particularly welcome.

Indeed there are still reporting restrictions in place forbidding the events of June 6th 1989 from being discussed in the media. These restrictions are the main focus of the Tiananmen-related protests that go on to this day. As reported by Amnesty International:

Concerns over freedom of the press have also been raised recently by the Beijing-based Tiananmen Mothers group which sent an open letter to the National People’s Congress in March 2007, urging the authorities to lift a publishing ban on three books that discuss the events of 4 June 1989, including Searching for the Victims of 4 June, by Ding Zilin, retired university professor who founded the group after her son was killed in the crackdown.

This request was made alongside the Tiananmen Mothers’ traditional call for an official investigation into the events, the prosecution of those responsible as well as public accounting and reparations for the victims or their families. The letter was signed by 128 victims and family members of those killed in the crackdown.

In a rapidly changing country like China, many will say it is better to 'move on' but this glosses over the fact there are parents of those who died who are still seeking answers or public acknowledgment of what happened, and that there are still people in prison today for their involvement in the protests (some even for discussing the protests).

Clearly, there will not be a full and public discussion about Tiananmen until the regime in China changes significantly - until there is some distance between the events and the people in charge - but I hope that does happen. Personally I think facing up to what happened in Tiananmen Square can only benefit China (both the nation and its people) and really allow China to 'move on'. 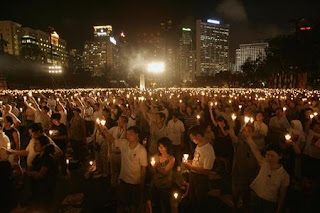 Posted by burntbreadboy at 10:25 am