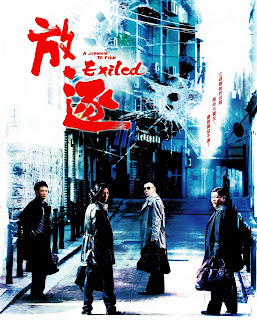 A film by one of Hong Kong's most innovative directors can be seen on the big screen in the UK. If his past films are anything to go by, expect a crime thriller with a few twists, and some impressively staged action set pieces.

'Exiled' has been described by critics as "a flabbergasting spectacle of kaleidoscopic violence that abstractly appraises codes of masculine honor" and "a moody crime drama that doubles as a revolutionary political allegory - ringing the changes on China's evolving reunification." Should be worth checking out.

Posted by burntbreadboy at 12:17 pm

Other than the 'big screen', does the BBCs follow drama series from HK? Is there HK programmes shown in the UK?

I know lots of bbcs' parents subscribe to The Chinese Channel, which is the European version of Hong Kong's TVB. This is probably the most common way of keeping track of HK media. Otherwise it's buying VCDs or very occasionally watching movies in a cinema (not many opportunities to do that though). Then of course there's always Youtube! :)