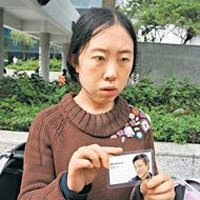 Some of you may have already read about Yang Lijuan, her obsessive quest to meet Andy Lau and how it led to the tragic death of her father.

So what happened next to Yang Lijuan?

Sadly, things have not really improved for her. In the days after her father's suicide, she and her mother were followed by the Hong Kong media as they wandered from hostel to hostel, looking for a place to stay. Incredibly, despite everything that had happened, Lijuan appeared determined to meet Andy Lau. Her mother also blamed the actor for the death of her husband and suggested he should pay compensation. Meanwhile, there is talk of turning their sad story into a movie.

Now reportedly living in Lanzhou, China, Yang Lijuan is said to be considering moving to a convent and becoming a nun.

It is reported that after her persistent obsession with Andy Lau and the disastrous trip to Hong Kong, the family has just US$200 to their name.

There is an in-depth article about this case from EastSouthWestNorth.

Posted by burntbreadboy at 11:52 am

This is what happens when you raise a little princess. She does not know the value of your sacrifices. Unfortunately today, China is awashed with little princesses and princes.