The 'bbc' causing a stir on the contemporary art scene 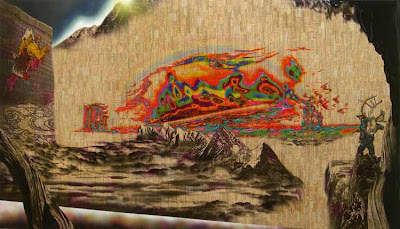 His parents moved from Hong Kong to London in the Sixties. His dad worked at a waiter. His early years were spent 'bored mindless' in his family's chip shop. He became interested in digital technology. Sound familiar? :)

He was told he would never get into the best art school in the country, St. Martins, but he did. Now Gordon Cheung is a celebrated, award wining contemporary artist.

Since graduating from the Royal College of Art in 2001, Cheung, a British-educated son of Hong Kong Chinese restaurateurs, has made his name with strange, visionary dreamscapes painted on to a backdrop of stock listings from the Financial Times. Over the past two years these economic landscapes of the imagination have made the shortlists of half a dozen art prizes, been included in the British Art Show 6, appeared in group exhibitions from Arizona to Slovenia and secured Cheung a solo show in São Paulo.

Two years ago financial pressures nearly forced him to give up painting. “I hit rock bottom, and when I clawed my way out I resolved to paint like every day was my last day.”

Story from The Times.
Posted by burntbreadboy at 12:26 pm

Email ThisBlogThis!Share to TwitterShare to FacebookShare to Pinterest
Labels: culture