Burberry may soon be 'Made in China' 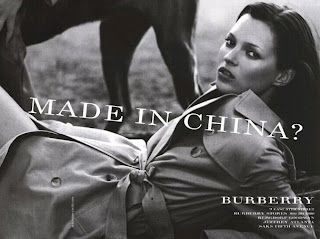 British luxury clothing brand Burberry has been in the news recently for its latest ad campaign featuring Kate Moss but another story about the company you might have missed concerns its decision to switch nearly all of its manufacturing from its traditional base in Wales to China.

It's a decision that has drawn fierce criticism from many and there is even talk of a parliamentary investigation over the matter. Actress Emma Thompson added her voice against the move, saying:

"Burberry should not make this move: it will brand itself as greedy, unethical and -- perhaps most importantly for the profile of the company -- inauthentic. By staying in Wales and honouring a contract that has long been held with the workers there, it will retain its code of decency and high standards. Anything else is a betrayal of the workforce and a bastardisation of the brand."

It is hard to see how Burberry can maintain its upper class, British image if it were to become common knowledge that its products were made in China by a workforce probably earning a pittance compared to the average western wage.

Many 'bbc's' and indeed Chinese people in general view lifestyle and luxury goods that are 'Made in China' as less desirable and a large part of the appeal of brands like Burberry is their authenticity and European origin.

Moving production to China will undoubtedly save Burberry money but it may find itself losing quite a few customers from the Far East as a result, even with Kate Moss gracing their posters!

More on this story here.
Posted by burntbreadboy at 11:23 am

Email ThisBlogThis!Share to TwitterShare to FacebookShare to Pinterest
Labels: lifestyle