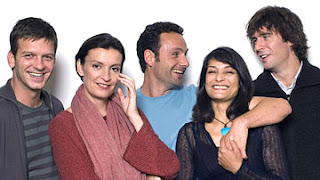 I found This Life compulsive viewing during the 90s. At the time, it was the only TV drama to set itself in a world anything like the one I was experiencing although when I look back at the shows now, the dialogue seems incredibly cheesy and unrealistic. Of course, this could mean that I and the people around me at that time were also incredibly cheesy and unrealistic but never mind.

So it was with some anticipation that I tuned in to watch 'This Life + 10' - the much hyped reunion show that would presumably try to portray thirtysomething life in contemporary Britain as insightfully as the originally series showed twentysomething life. Surprisingly, a Chinese character appeared early on in the show. Specifically, a Vietnamese model based in Hong Kong who had married one of the lead characters, Miles (he's the guy on the far right in the picture above, if you don't know the show).

Interesting... How, I wondered, would TV drama's 'voice-of-my-generation' portray a Chinese/English mixed relationship?

Well, sadly, the Chinese character was a bit of a cliche - all timid and awkward - only coming to life mid-way through the show when she had a semi-breakdown (brought on by being around the characters of 'This Life', I guess).

It didn't seem to occur to the writer that a professional model based in Hong Kong might in fact have quite a personality, confidence and energy about her. Clearly, we were being asked to see her as an 'ornamental Oriental' and before long, the acerbic female character, Anna was referring sarcastically to Miles' wife as a 'geisha'.

Later on, Miles says his wife naively married him because she thought he would be 'an English gent'. Anna suggests he went along with it because he thought she would 'an easy ride.'

I thought this was the most interesting aspect as it's not often you see a white, female's perception of mixed relationships expressed so frankly, and it got me thinking.

In Paul Courtenay Hyu's Missing Chink programme of 2004, people in the street were asked to give their general perceptions of Chinese people and at least one (white) female described Chinese women as 'pleasure givers'.

From Little Britain's Dudley and Ting Tong to This Life + 10, white male + Chinese female relationships tend to get a bad press. Often it's suggested the woman is needy or subservient to her man whilst the white male is, by implication, a bit of a loser and inadequate - in some way not good enough to get a 'normal' girlfriend. It struck me that this really isn't a positive view of Chinese or Asian women.

The question is should the media be criticized for these kinds of portrayals, or is it simply reflecting the truth? After all, 'This Life', whether you like the show or not, does strive to be authentic in a way many other shows do not.

Now all we need is for someone to depict a Chinese male + white female relationship and things would really get interesting :)
Posted by burntbreadboy at 4:43 pm

I think the problem with how relationships between Western men and Chinese women is viewed is a cliché which is hard to shake off. When I was living in Beijing, my friends and I would often see fat, ugly foreigners with girls half their age. We regarded such relationships as unreal because of the obvious mismatch between between the parties.

We saw the adverts in local magazines, "Chinese girl seeks Westerner. Looks not important, but must have kind heart". It was hard not to think that the interest was mercenary. In other words, such a relationship couldn't be genuine.

I think it'd help if the relationship wasn't portrayed with a whiff of Asian mail-order bride about it. In other words, she's Chinese; no one is bothered because it's just another relationship. Think of Ross and his Chinese American girlfriend, Julie, in the second series of Friends; or Ling in Ally McBeal. In neither case was any fuss made about them being Chinese. I can't think of anything similar from British telly, although I'm sure there ought to be.

As far as I recall, I've yet to see a Chinese guy with a Western girlfriend, although I do know a female colleague of mine in Suzhou has been there, done that. But again, if we're talking about the telly, could such a relationship be portrayed without there being some sort of cultural disharmony because the writers have been taking all their ideas from The Bumper Book of Mixed Race Relationship Clichés? I long ago noted that writing for TV is often riddled with clichés because the writers seem unable to produce anything else.

Its a shame that these clichés still do exist - for too long, we (or I at least) keep saying that "in this day and age, the media still perpetuates the stereotype..etc..etc".

As they say, no smoke without fire, but the mail order bride example is in China, not in the UK, where the media that originates here still perpetuates the cliché. That's a mismatch if any, and maybe that is because the writers don't know better - or there is no access to writers that do know better. I don't know - it's not my industry. But I do know that there are some good East-Asian writers in the UK. But they too face discrimination to some degree.

Its inevitable that things will change and an honest portrayal of East-Asians in media will happen. Its just a case of how much effort that will take and when it will happen.

Well, I'm British-Chinese and engaged to a (white) Welsh woman. So it does happen. ;-)

But I've never seen it expressed on screen, even though I've spotted the odd Chinese-man/white-woman couple on the streets of the UK. So they are out there.

But while the Chinese-woman/White-man relationship is a handy shortcode in media terms for the mail-order thang (although to This Life's credit, there's no real suggestion that Miles "bought" his bride) the only potential media stereotype a Chinese-male/white-woman relationship can bring in is the whole Yellow Fever panic that swept America in the 1930s. And no-body wants those days back again. (Even if it might boost the chances of Chinese men scoring in nightclubs!)