Found this story on Asianfanatics.com

Cantopop star Joey Yung appeared at the 2007 Chik Chak Music Awards show to pick up an award wearing a distinctive, starry tutu outfit. All would have been fine were it not for the fact that the outfit was a pirated copy of a design by Viktor and Rolf. 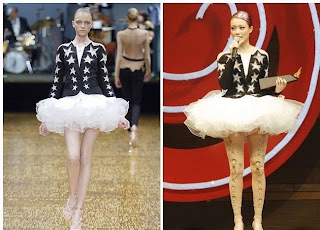 Cue dozens of complaints from eagle-eyed, trendy Hong Kongers and an apology from the star. Only in Hong Kong!

More on the Chik Chak awards: The big winner was Leo Ku who won four big awards, including Album of the Year for "Human" and Favorite Song. He ran second for the Male Singers Award and his single "It's Too Late to Love" was listed in the Top 10 Songs.

Also check out Eason Chan's, erm, distinctive outfit (below) from the show (the Chik Chak awards have a tradition of stars dressing as outrageously as possible). 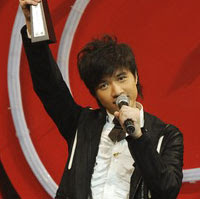 Posted by burntbreadboy at 4:42 pm