Sanney Leung of HK Entertainment Review is back!

Sometime ago there used to be a very popular English-language site called hkentreview.com that discussed the latest news from the Hong Kong entertainment industry. At the time it was pretty unique and was one of my regular bookmarked sites.

Then, as I posted on the bbc blog, the site was suddenly taken over by a holding company an the author Saney Leung seemd to disappear from cyberspace. Later it emerged that Sanney was battling cancer.

Well the good news is that Sanney is doing well and is back blogging! He is now a regular contributor over at LoveHKFilm.com. Check out his blog right here.

New Pants (made in China)

Hailed as the coolest band in China right now, are New Pants a sign of what's to come? Or do they live up to their name in a bad way? Check them out for yourself right here:

Posted by burntbreadboy at 10:53 am No comments: 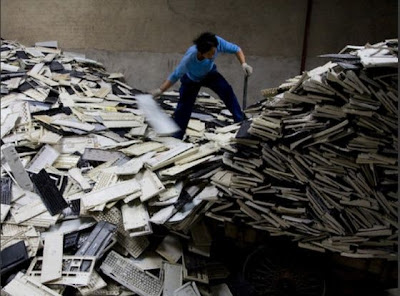 Check out this article about the town of Guiyu in China, a centre for recycling of electronic waste.

Here in the UK we hear so much about the environment and 'going green', but little attention is paid to what actually happens to the waste we send abroad to be recycled. A case of out of sight, out of mind?

This is a mess. In Guiyu, China, the electronics recycling industry has destroyed the ground water and lead poisoning is effecting young children due to the overall mess created by this lucrative sweatshop industry. Money is money, however, and we should start talking with our wallets to the fools and damn fools who churn out piece after piece of quickly obsolete electronics. I don’t know the answer to this problem, friends, but fully recyclable electronics is definitely a start.

Follow the links for some shocking photos and a multimedia presentation.

Posted by burntbreadboy at 10:20 am No comments:

Email ThisBlogThis!Share to TwitterShare to FacebookShare to Pinterest
Labels: China, gadgets and tech

Huh?
Posted by burntbreadboy at 8:44 am No comments:

Have you spotted any 'Frozen in Time' places?

A request to bbc blog readers: Have you noticed any 'Frozen in Time' Chinese restaurants or takeaways where you are? If so, please take a pic and send it in! I would love to add to the two already posted.

'Frozen in Time' is a bbc blog celebration of Chinese establishments that have stood the test of time and kept their original look in an age of constant revamping and updating.

Click here to see what I mean.
Posted by burntbreadboy at 11:28 am No comments: 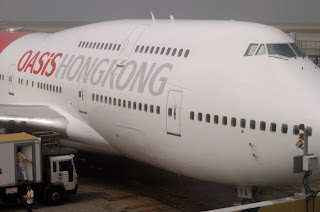 Whoa. The budget airline flying from the UK to Hong Kong has applied to go into liquidation with debts of 1 billion Hong Kong dollars.

The not even 2 year-old airline had hoped to shake up the air travel industry by being the first 'no frills' long-haul carrier but clearly the concept has failed.

Customer helplines have now been set up for people holding Oasis tickets. The numbers are:

Posted by burntbreadboy at 12:43 pm No comments: 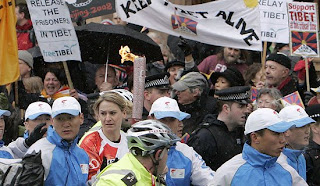 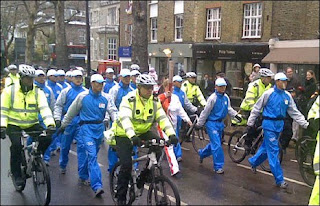 The parade of the Olympic torch through London last Sunday turned into a debacle as several Tibet protesters broke through police cordons and managed to seriously disrupt the procession.

What was meant to be a brilliant public relations exercise designed to generate public excitement about the Beijing Olympics in 2008 turned instead into a chaotic mess that will be viewed as a success by pro-Tibet activists, and which has inadvertently managed to reinforce a negative image of China.

There has been a lot of disquiet expressed about the Chinese 'heavies' running alongside the torch during the parade and the manner in which they behaved when there was trouble.

Who were these mysterious men in tracksuits with earpieces shouting orders?

What jurisdiction did they have to manhandle members of the public, potentially causing injury to either themselves or others? Were they the ones running the show or was it the Metropolitan police, who were also there alongside them in great numbers?

You can see more footage of the clashes here.

Some observers felt that the altercations they witnessed on TV were a unpleasant taste of Communist China style policing taking place on British soil. And they didn't like it:

One protester who managed to break through the police cordon, David Allen said his anger at the parading of the torch through the capital flared at the sight of British sporting stars being guarded in the streets of London by Chinese security men. "What really got my goat was our sporting heroes being surrounded by the Chinese security heavies guarding the torch," he said. "It makes us complicit in the regime's repression. You have to ask, 'Where were these security men last week?' Beating up people in the villages of China, no doubt."

Well, that may be an exaggeration but according to Reuters, the specially selected 'torch attendants' were indeed hand picked from the ranks of the same armed police force that would have been patrolling the streets of Lhasa.

Its members were picked from the ranks of the People's Armed Police, the security force spun off from the army that is responsible for riot control and domestic stability. Tens of thousands of "wujing", as they are called in Chinese, have been deployed to Tibet and neighbouring areas to quash recent unrest.

In an unguarded comment, London Olympics chief Sebastian Coe is reported to have said about the Chinese security guards: "One thing in Paris is to get rid of those guys. They tried to push me out of the way three times. They are horrible. They did not speak English. They were thugs."

A further sense of how some British people feel about this incident can be found on the Guido Fawkes blog 'Order Order', a well known political blog specializing in British parliamentary matters. It was especially critical of Prime Minister Gordon Brown's decision to be involved in the ceremony:

A selection of some of the comments:

"Very worrying to see UK police surpressing protesters with the help of blue track suited Chinese special forces. The touch relay has nothing to do with the Olympics and everything to do with Chinese propaganda. We in the UK are somewhat free sometimes to protest, totally unlike those long hard suffering Tibetan people."

"The Met should have arrested one or two to make a point that the Chinese may be able to shove people around in Tibet but not in Downing Street. This whole debacle did nothing for this country"

"We were deeply ashamed to watch the whole damning episode on last night's news. There's really nothing even faintly amusing that can be said about seeing this embarrassing farrago and the disgusting sight of Chinese security men taking precedence in London streets and outside No 10."

"Why should I have to pay for some Chinese Properganda ON MY SOIL? Then to top it all off there was the sight of some Chinese stormtroopers marching in formation down Downing Street pushing people and ordering them about for a photo-op"

"I particularly liked the black leather gloves sported by the chinese secret police, all the better for smacking any protesters around."

Clearly the presence of the torch attendants did not go down well. So why wasn't the whole thing managed by the UK police? Well, in the aftermath the police have blamed the Beijing Olympic Committee for making many of the key decisions about the parade and the chaos that ensued.

I have to admit it's hard to imagine experienced, local London cops running an event in such a mismanaged and chaotic way as was seen that day.

Posted by burntbreadboy at 1:52 am 7 comments:

The chocolate commercial should have used this guy instead.

Posted by burntbreadboy at 4:54 pm No comments: