Images of Mongolia by Stephane Passet, 1913

I literally just saw this on a BBC documentary and I thought it was worth a blog post.

Stephane Passet went on an odyssey through Asia in the 1910s, taking some amazing colour photographs on the way.

Photo: Daily Telegraph.
The image shown is of a female Mongolian prisoner. Passet recorded that she had been imprisoned for adultery but historians have cast doubt on this, as Mongolian culture of the time was thought to be tolerant of adultery.

The purpose of imprisoning people in a box in this way was to allow the nomadic people to transport prisoners from place to place. It was 'portable imprisonment'.

People who took pity on prisoners were allowed to leave them food and water and small bowls can be seen in the photograph, just beyond the reach of the incarcerated woman.

A teaser trailer for Stephen Chow's next movie CJ7 has just been released.

Looks pretty funny. Mixing Chow's trademark Cantonese humour with sci-fi should produce a film as enjoyable as 'Shaolin Soccer'. Let's hope they pack the film with as many jokes as special effects, though ('Kung Fu Hustle', anyone?)

The false story about the Chinese 'Coca Cola' tattoo

Here in the UK, a story was reported in The Sun newspaper about a Watford man, Vince Mattingley, who asked staff in a Chinese restaurant to translate his name into Chinese and got the words tattooed on his chest.

It was not until 26 years later that he learned, whilst on a trip to Thailand, that the characters etched on his skin were not his name but in fact spelled 'Coca Cola'.

The report quoted his obvious annoyance about this and the fact that he intends to cover up the tattoo with a new one - in Japanese this time.

Now, Mr. Mattingley comes out of the story looking a bit of a fool but the story also paints a negative picture of the Chinese restaurant staff who advised him. Clearly, they must have been quite malicious and inconsiderate to deceive Mr. Mattingley in this way.

The only problem is... the tattoo does NOT say Coca Cola in Chinese.

This is one of those quirky, funny, viral stories that gets emailed and forwarded around and sure enough, it soon went all around the world but the story is false.

What the tattoo spells is a close but not perfect phonetic translation of the man's name - Vincent. The characters are actually the same as those used by the Chinese drug and cosmetics chain 'Watsons' which has branches throughout Hong Kong.

This is a close up of Vince Mattingley's tattoo: 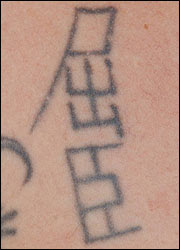 This is a charity appeal ad by the Watsons chain in which you can see the same two characters: 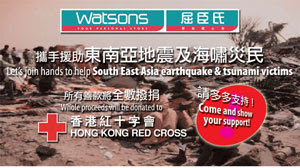 This is an ad for Coca Cola in Shanghai where you can clearly see that the logo is totally different: 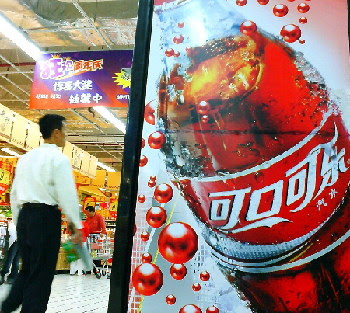 Pic: China Daily
There is no direct Chinese translation for 'Vincent' so the Chinese restaurant staff must have come up with the best character combination they could that both sounded like his name and made sense as a phrase (that wasn't obscene or odd-sounding etc.).

So far from being a cruel trick played by sneaky Chinese people, the tattoo on Mr. Mattingley's chest is probably the best match possible to his name in Chinese.

It's not clear why someone in Thailand told Mr. Mattingley that his tattoo said 'Coca Cola'. It might have been a simple wind-up, or they may have been referring to the Watson's brand of water and cold drinks. In any case, that's not what the tattoo says.

A urban myth involving Chinese people that turns out to be false? Who would have thought it?

Related: Stupid rumours about Chinese restaurants. Will they never end?

Posted by burntbreadboy at 8:52 am 2 comments: 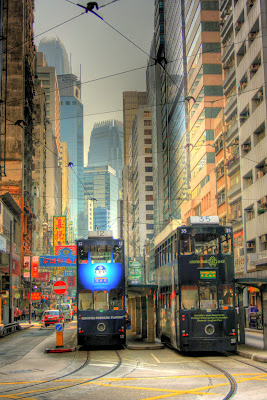 Photo: pav21.
Found these images posted on the excellent Skyscrapercity.com.

'HDR' is a new fangled digital photographic technique that crams as much tonal information as possible into a single image, so that you get tremendous detail throughout the photo (or something like that anyway).

This photographer has used the technique to take some highly atmospheric images of good ol' HK. See what you think: Gallery.

Posted by burntbreadboy at 6:35 pm No comments:

I've heard of 'maid cafes' in Japan but I honestly never thought the idea would catch on in HK which has (I thought) such a different sensibility about these things.

The waitresses seem more than happy about the slightly odd concept, and the place looks busy, too. A potential new trend for HK?

Posted by burntbreadboy at 10:48 pm 3 comments:

'Banana in a Nutshell' - Can Chinese parents still love you if they do things that upset you?

I've been meaning to post about this for a while. Banana in a Nutshell is a short film that I saw on a plane (in fact, I think it was a flight to HK) and I thought it was a really interesting short film that quite a few bbcs can relate to.

It's a documentary about a young New Zealand Chinese (NZBC?) girl called Roseanne and her relationship with a white boy. The film shows the anxious build up to the boyfriend meeting Roseanne's father, and Roseanne's stress concerning her parents' reaction. The film's official website is here: http://www.banana-film.com/index.html.

The boyfriend situation is the main event depicted in the film but it actually covers Roseanne's entire relationship with her parents and siblings and the East vs. West conflicts that come with being 2nd generation Chinese.

The film is very heartfelt, especially one scene in which Roseanne tearfully tries to understand why her parents never show her any outward signs of affection. Does this mean they don't love her, she wonders? Yet why would they have worked so hard to provide for her, if not out of love? This is something I think many young bbcs will have thought about at some point in their lives.

If you get a chance to see it, I highly recommend 'Banana in a Nutshell'.

As for my own thoughts on this, I think there will always be a big difference between how we, as a westernised generation, expect parents to behave and how our parents have been brought up to behave. We have different ideas about what is 'right.'

It is a lot to ask of the older generation to totally chance their demeanor and personalities just to fit what we, as 2nd generation, have come to regard as 'good parenting' - a view that has been shaped by a totally different upbringing.

Differences exist between the generations, but I think the key is to acknowledge that and learn to accept it, rather than isolating one side or demanding that one side changes to match the other.


UPDATE: 'My Wedding and Other Secrets' - a NZBC movie

Posted by burntbreadboy at 9:09 am 11 comments:

The video below shows three British males having a laugh and a joke at the slow pace of the rickshaw that they're riding whilst on a trip to Singapore. They then refuse to pay the fare (10 Singapore dollars - about 3 pounds), despite the driver's pleas, and he is clearly someone in need of the money.

People in Singapore have been outraged at what they see as the gross mistreatment of an elderly man: The driver of the rickshaw, Lee Shee Lam, is 67 and he was attempting to carry 3 adult men in his rickshaw (which would explain the slow pace of the ride).

The video is certainly uncomfortable viewing. Is it abuse of an old man or 3 tourists who feel they're being ripped off? Judge for yourself:

An indication of the anger the video has generated can be read here: