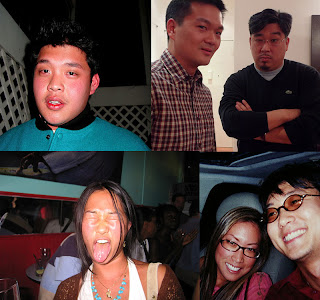 Photos: Various via Flickr
You know how it is: You're out with a bunch of friends (of varying ethnicity). You down a couple of drinks and someone looks at you asks "Have you been out in the sun?"

Yes, the dreaded Asian Red Face strikes again. But on a more serious note, the New York Times reports that Red Face Syndrome isn't just a cause of embarrassing photos, in some cases it might be related to an increase risk of oesophageal cancer:

The flushing response, which may be accompanied by nausea and a rapid heartbeat, is caused mainly by an inherited deficiency in an enzyme called ALDH2, a trait shared by more than a third of people of East Asian ancestry — Japanese, Chinese or Koreans. As little as half a bottle of beer can trigger the reaction.

The deficiency results in problems in metabolizing alcohol, leading to an accumulation in the body of a toxin called acetaldehyde.

People with two copies of the gene responsible have such unpleasant reactions that they are unable to consume large amounts of alcohol. This aversion actually protects them against the increased risk for cancer.

But those with only one copy can develop a tolerance to acetaldehyde and become heavy drinkers.

It seems that the most at risk group are those who used to go red very easily early in their lives but who now don't - as this suggests they have lost the 'early warning system' of going red.

As ever, the safest response for Asian drinkers would seem to be 'everything in moderation'. Keep your alcohol consumption down overall (less than 16 drinks a week) and you'll reduce the risk of cancer significantly.

Posted by burntbreadboy at 10:06 pm 2 comments: 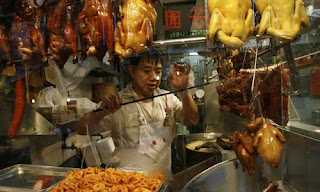 No doubt everyone has their favourite memories of HK fast food. My personal favourites are the char chan tengs (glass table tops, tea served in cloudy plastic beakers and vast pots of steaming beef brisket in the windows) and those ubiquitous chain cafes like Fairwood and Maxims - all fast, cheap and with varied menus.

The UK's Guardian newspaper has just published a list of some fast food outlets you may not be familiar with but which seem to be worth checking out:

Hong Kong is one of the most vibrant food capitals in the world, with a staggering 12,000 restaurants to choose from. The Michelin Guide launched here at the end of last year- a foreboding green light for celebrity chefs to open expensive gourmet restaurants. They would be missing the point: Hong Kong certainly isn't somewhere you have to spend a fortune for fabulous Chinese food.

So here is an alternative guide for budget eating out, where the quality and freshness of the food is what counts, not the decor and service.

Posted by burntbreadboy at 11:00 am No comments: