BBC website uses the word 'chink' on its front page 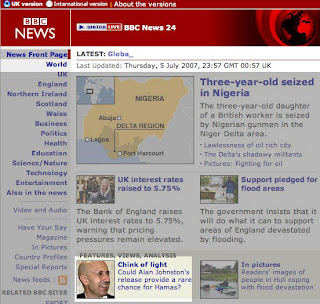 I don't know about you but when I see the word chink used in this way, my reaction is anger, followed by a self-censoring 'don't make a big deal out of it', followed by 'why the hell do they still do that?'

I have never understood why, in this day and age, the word 'chink' is so freely used. Yes, the word has two meanings. It has a legitimate meaning as a noun, and it is also a racial slur.

But unlike other words which are both nouns and racial slurs such as 'spade' or 'frog' (boy, the English really do excel at racial insults), the noun chink is pretty much used exclusively in a metaphorical sense where a variety of other words could easily be used in its place. It is not what I would call a 'real world', must-be-used-to-be-understood kind of word.

There's just no need for it and if you know that using that word will offend a particular ethnic group, why not just swap it for another? It's not that hard, is it? Would that BBC front page have suffered had the headline been 'ray of hope' or 'glimpse of light' instead?

Is it really too much to ask for people to not to use a racial slur when there are other words available? Perhaps it is... when Chinese people are concerned.

Let's consign this phrase to the dustbin of abandoned, out-dated language.
Posted by burntbreadboy at 10:09 am

It's not a racial slur unless it's used as one. Words are only words, it's the intent that matters, IMHO.

I think you're being over-sensitive. I'm not offended by it because it is clearly not used as a racial slur.

Strictly speaking I'm not offended by it either, but I did find it annoying. I just feel there is no need to use this word, when you know it has a double meaning and when there are plaenty ofother words you could use. It's lack of sensitivity and a lack of awareness, in my opinion.

It's not offensive at all, you shouldn't make a fuss! the word chink in this context is not being used as an offensive term and it's so clear that it's not, so why all the bloody fuss?

Shall we stop performing Shakespeare because it uses the word "niggered" even though we know full well it's not being used in relation to race at all?

I think my reaction is to remain neutral when I come across the word. Otherwise I would end up wincing at other word related to that meaning such as crack, slit, sliver etc... The only time I find the word chink offensive is when some people say the 'Chinks' or 'Chinkies' instead of Chinese takeaway. Strange though how there really isn't an offensive term for white people in a racist sense. I mean a general English word w/a sense of hatred attached for Whites. I guess other races just tolerate them better.

Do you think the way Hong Kong Chinese call non-Asian foreigners is more appropriate? 'Gwei-lo': literally, ghost-man, that is to say 'living dead'.

And they use it at the face of people!

Dude, don't be so sensitive. Look at the context that the word is being used in. The story did not use the word in reference to peoples of Chinese decent.

Just to be clear I do realise that the word 'chink' has a legitimate meaning - in fact I mentioned this fact in the original post.

The point I'm making is that it was insensitive to use this word when others could have been used, when you know that the word 'chink' is also a racial slur.

It's funny - we live in a time when organizations go to great lengths to be racially sensitive and not to cause offence to other minorities, and yet something like this slips through.

So, I'm not complaining that "the BBC called us chinks", but rather that their use the word shows insensitivity and I question whether phrases like "chink of light" are appropriate in this day and age, especially when you can substitute it so easily.