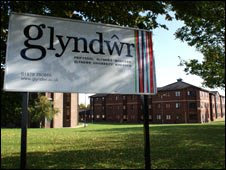 I found this incident quite appalling, especially as it allegedly involves a member of staff at what is meant to be a place of higher learning.

It is also, in a way, a type of incident that I feel a lot of bbcs can identify with.

Mongolian-born Odgerel Hatenboer wanted to apply for a Chartered Institute of Management Accountants course at Glyndwr University, Wrexham. At the time she was already a masters student in economics and had a diploma from the Association of Accounting Technicians.

When she discussed this with a member of university staff, she was shocked at what she was told:

She said: "The man said something like 'I'm not saying you're Chinese but people like you, Oriental people, tend to accept what is written in the books and what the lecturer says, whereas this kind of course is nothing like you have studied in the past, it requires more analytical skills, you will have to do more yourself."

"This didn't happen on the street or in a shop, this happened in a university which is supposed to be multi-racial institution with educated people.

"I think it's outrageous. I can not believe it happened. It's appalling that a member of staff commented on an individual because of their race. He didn't even ask about my background or qualifications."

I accept that this is one person's account of an incident but if it's true then damn right it's outrageous. However, I'm sorry to say I think this the kind of thing isn't rare. At times it seems we are last race left in Britain that people happily and openly stereotype without a second thought.

To hear stuff like this is bad but in some cases it might have been dismissed as a 'harmless' comment that had perhaps been taken the wrong way.

However, in this case the prejudice behind the comments may have been underlined by the fact that the student's application form was not submitted to the university by the member of staff even though it had been completed.

Had he just unilaterally decided the course was not for this 'Oriental' and chose to deny them even the right to apply?

(Another point: I notice that this condescending, racist person used the word 'Oriental' to describe us, which I've never liked. It's totally out-dated and has a rather patronising, colonial sound to it.)

Odgerel Hatenboer is reportedly planning to take legal advice. Meanwhile, the university has responded by saying it has taken appropriate action but does not say what.

It also says Mrs. Hatenboer's application was 'misplaced' and not deliberately held back. I guess they found it again then, eh?

Posted by burntbreadboy at 2:55 pm