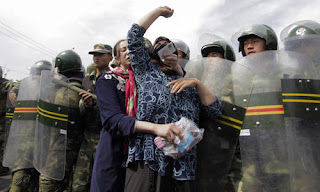 Report from the Guardian:

The official China News Service has reported that the nine were executed after a final review of the verdicts by the supreme people's court as required by law. It gave no specific date or other details. Earlier reports had identified those condemned as eight Uighurs and one Han.

The executions did not come especially quickly for China, which puts more people to death than any other country. Politically sensitive cases are often decided in weeks, especially when they involve major unrest.

The nine had been convicted of murder and other crimes committed during the riots in Urumqi, Xinjiang's capital. China blames the rioting on overseas-based groups agitating for broader rights for Uighurs in Xinjiang."

However, I wanted to see the story from the China side, so I went to the China Daily international website. Surprisingly, I could find no mention of the executions.

Personally I am opposed to the death penalty anyway, so any report of state executions in any country make unpleasant reading but there is something especially disturbing about this story, specifically how little information is released.

You would think that for a court to convict these people and sentence them to death there must be some pretty damning evidence against them. For example, if a murderer is sentenced to death in the United States, the minute details of the case will have been reported for weeks or even months previously. Anyone following the case will be usually well informed on precisely what the alleged offender is meant to have done and what evidence there was to support the charges.

In the case of these executed prisoners, the Guardian says hardly details of what they did, how they did it, or when they did it have been released. Earlier government statements had said some of the accused had been charged with murder but besides the accusation, virtually nothing else is known. Apparently even the date they were executed has not been disclosed.

Every country has a right to maintain law and order but this amount of darkness and secrecy surrounding executions is wrong, in my opinion. Letting the public know what these people did and the evidence against them would only add legitimacy to China's actions. So why the secrecy?

Posted by burntbreadboy at 8:01 am

I love your second to last sentence, and I think it sums up the situation well.

"Letting the public know what these people did and the evidence against them would only add legitimacy to China's actions."

In my opinion, trials behind closed doors hold no legitimacy whatsoever. If the pubic aren't allowed to know the evidence against a defendant, then how can we know justice is being done? It seems even the identities are being kept secret in this case.

Yes, I share your worry over this. I'm also opposed to the death penalty but this furtiveness makes a bad situation even worse.

The CCP is a sinister entity opposed to any decent moral values, I got a blog about Falun Gong from a Western practitioners persepective, welcome to check it out, it's designed for you, there's music alt rock spoken word poems on the related website worth checking out all about the persecution of Falun Gong. Cheers.
www.freedomforchina.blogspot.com

I agree with you, its sad what has happened there :(