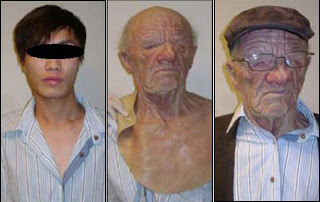 A man, likely to be a Hong Kong or Chinese national, has been caught going to extraordinary lengths to disguise himself for a flight from Hong Kong to Vancouver. However, no-one is quite sure what his plan was or how he achieved his professional-looking disguise.

The details being reported are sketchy. Apparently, the Asian man boarded the plane using a swapped boarding pass. This implies that he went through passport control using his real identity then obtained a different boarding card whilst in the departures waiting area. Perhaps he got past security because he had a ticket for a different flight (not to Vancouver)?

Reports suggest the Asian man got the boarding pass from an accomplice (who would have been booked on that Vancouver-bound flight). In which case, what happened to the accomplice. Did he just stay behind in HK?

The plot was rumbled on the flight itself when it was noticed (by flight attendants, I guess) that the 'elderly man' had youthful looking hands. Although, since the disguise was ditched in mid-air, you would think that the sudden disappearance of a passenger and the appearance of a Chinese man from out of thin air might also have raised eyebrows!


Posted by burntbreadboy at 4:57 pm