Today is the day that spooks, ghosts and ghouls come out to play so I thought I'd put together a suitably spooky list for the bbc blog.

A word of advice, if you meet any fair Chinese maidens playing a Chinese harp on your way home tonight... be careful!

#5 The ghosts and ghouls of 'Chinese Ghost Story'

A silly yet highly watchable HK film from 1987. 'Chinese Ghost Story' has production values that would put many modern HK movies to shame. It comes from an era when productions seemed to be a lot more lavish and more effort seemed to go into staging spectacular movies.

Another 80s classic, this is thought to be the movie that launched the whole 'hopping vampire' trend in films and TV. The original Chinese vampire myth is much older, though, and is believed to have originated from times when deceased people were transported back to their home village by attaching them to bamboo poles. When the pole flexed, it gave the impression that the cadavers were bouncing up and down.

Playing the ghost of a woman from the year 1900 who roams the streets of modern Hong Kong looking for her long lost lover, Anita Mui sent shivers down the spines of moviegoers. An iconic, unforgettable performance.

He's pretty tame compared to the weirdos we have on the London Underground, but Mr. Bus Uncle is nevertheless plenty scary, in that losing-it-under-pressure kind of way. 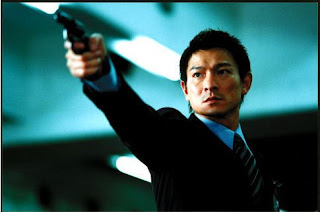 Yes indeed. Andy Lau's corrupt cop is as menacing as they come. Not only evil but cunning too, and one of the best movie baddies ever. I'd rather tackle a hopping Vampire any day.

Happy Halloween!
Posted by burntbreadboy at 11:49 am