Despite being in what must be the least annoying of the Halifax can't-get-it-out-of-your-head series of commercials, Thomas Yau appears to have become something of an annoyance to many people, according to London paper the Metro. Even a member of BritishChineseOnline.com is quoted as saying - quite bizarrely:

'I saw it on telly and hung my head in shame and disbelief.'

Hopefully not all of us are prone to such feelings when we see a Chinese face on telly but if Thomas and his singing aren't your thing, there is another new British Asian face on our screens at the moment: 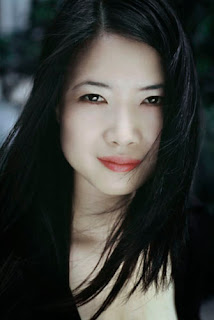 Maye Choo has a recurring role in a high profile ITV drama 'Honest' starring alongside veteran actor Burt Kwok who plays her father.

To be honest (no pun intended) when I first saw Maye Choo's performace I was surprised at how good it was - quite confident and convincing. I think the unusual thing about her character is that she isn't just a 'Chinese type' but is actually a scheming, plotting character with motives who gets really involved in the plot. It's not the kind of thing you see that often from a Chinese character and I think it makes a nice change.

Maybe this be a future star to watch?

'Honest' is on ITV Wednesdays at 9:00pm
www.itv.com/honest

Posted by burntbreadboy at 4:55 pm

i know her in person

Hate to tell you know-it-all's but Maye Choo is NOT a "British Chinese Face" She was born (quote)"Maye Choo (born March 1, 1974), is an actress who was born in Quang Ninh, Vietnam."

Can't you Brits get anything right???

She looks like my Chinese school teacher. Or is it her?