Flying to HK soon? You might want to avoid British Airways and Heathrow 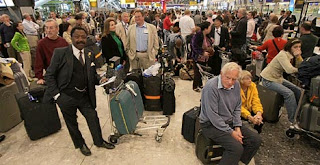 Photo: Thisislondon
They are calling them 'teething problems' but that seems like a bit of an understatement.

Heathrow Terminal 5, the new UK hub for British Airways, including its Hong Kong to London route, has suffered a disasterous opening day and the chaos is expected to continue.

As reported in the Times:

My daughter was at terminal 5 last night trying to get on her flight to Hong Kong. We received a call from her in HK at 4.30 am in the morning saying that it was complete chaos and she was unable to check in her suitcase. She had been told that she could try to find a hotel for herself and to see if there was a seat available tomorrow or leave her luggage behind and collect it when she returned. No assistance was given with this. She was then told that all left luggage storage facilities were full. Eventually she was helped by a policeman who directed her to a left luggage facility on the next floor.

There were no BA staff around to answer queries and no proper management. She has left all her clothes and belongings behind and the man operating the left luggage facility ignored her question as to what the charges for left luggage would be. BA has got to take responsibility for this. There was no crisis management at Terminal 5.

Whilst it would be easy to point to Hong Kong's Chek Lap Kok airport and say, "That's how you do it," it's worth remembering that even that airport had problems when it first opened too. They were not on the scale of what is being reported at Heathrow T5, though, and I doubt you would have seen the appalling customer service that the papers are currently reporting. (EDIT: In Hong Kong's case it was the entire airport that was new, whereas at Heathrow it is just one terminal serving one airline)

I've never been a fan of BA but I certainly won't be booking with them now if I can help it. And it sounds like steering clear of Heathrow T5 for a while would be a good idea too.

Posted by burntbreadboy at 10:10 am