We do invisibility so well... 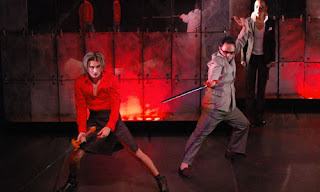 I just spotted this article on the Guardian website: 'It's time to put British east Asian theatre in the spotlight'

In it, theatre director David Tse Ka-Shing comments on the lack of British East Asian faces in the British media, when other ethnic groups seem to get plenty of airtime.

Of the three largest ethnic minority groups in the UK, the British east Asian (BEA) presence in arts and culture is still the most invisible. Go to any subsidised theatre or turn on the TV and you'll know what I mean. EastEnders, in 23 years of being broadcast, has regularly featured south Asian and black families but the only Chinese presence so far has been someone selling dodgy DVDs.

It's a far cry from the 100,000 or so British east Asians – the majority of them professionals – living and working in London.

...We are not temporary visitors, so why are the majority of BEA actors asked to put on foreign accents? It's as if we don't belong here or that we can't sound British.

It's true. It seems to be an uphill struggle getting more Chinese faces on TV screens. Especially men, for some reason. I've noticed that East Asian women generally get more screen time for example in commercials and pop videos but they are usually in the background, not saying anything. 'Ornamental Orientals', you might call them.

Proper characters played by East Asian actors do appear every now and then, but ever so rarely. I've tried to use this blog to highlight any new Chinese actors or performers I spot on TV but that in itself is probably a sign of how little coverage we get - i.e. it's a rare enough occurrence to justify a blog post!

I know what you're thinking: Gok Wan is never OFF the telly, what am I complaining about? Whilst it great that Gok has become perhaps the biggest, most recognized bbc celebrity of our time (respect!) wouldn't it also be nice to have a few more faces on our screens regularly? A male presenter, maybe? A comedy actor? As David Tse says, a character in EastEnders? And I'm sure there are sociology experts out there who can offer an explanation as to why East Asian women and gay men are more readily given air time in the media, as opposed to straight, East Asian men.

All things considered, this makes the Halifax commercial starring Thomas Yau something of a major achievement!

I remember when I was growing up, if I ever saw a Chinese face on television I would jump up and tell my parents. It was a fleeting moment not to be missed, like the sighting of a comet or a rare animal. Years down the line, I'm writing about the same thing on a blog. Things have not changed that much.

Related: Thomas Yau, star of new Halifax commercial
Related: His name is Gok and, ladies, he might change your life.
Related: From Potter to Popworld...The bbcs are coming!
Related: Maye Choo joins the growing list of British Chinese in the media

Posted by burntbreadboy at 11:10 am

If the level of acting in Moonlight Resonance is used as a standard of quality for Chinese acting, I would say it's best for the BBCs to stay off the British screens and stages for a while longer...

Joking aside, most of the BBCs are probably too busy being 'professional' to risk going into the world of 'art'. How can we improve our standard of living, support our family / parents, repay our parents (and ancestors) the almost eternal debt of their sacrifice for us by choosing to be an impoverished artist?

Chinese customs are hard to leave behind...

"If the level of acting in Moonlight Resonance is used as a standard of quality for Chinese acting, I would say it's best for the BBCs to stay off the British screens and stages for a while longer"

I wouldn't be so sure. Have you seen EastEnders lately? :)

Regarding the above comment - as usual, it's typical for Chinese to be hyper critical of other Chinese people trying something different for themselves. It's true that many young Chinese still feel the need to be in 'professional' (read: well paid) jobs in order to pacify mummy and daddy - those with a more independent spirit however would find it too difficult to lie to themselves and do something they hate for the sake of giving Gran something to brag about.

Regarding the post as a whole - its interesting how in the US there are lots and lots of random Asian faces. Not just sexy Asian women but nearly every major series I have seen has no qualms with having some Chinese faces in there. In England, I would still, to this day, sit up and take notice because its so rare.

Gok, god love him, is great but he's definately 80% British - he is mixed race, he barely speaks Chinese. Same goes for people like Alexa Chung - a hint of Chinese blood but what about her, apart from the surname, comes across as Chinese?

I don't agree that Alexa Chung has only a hint of Chinese blood. Her father is definitely Chinese. Here is Alexa and her father. http://alexachungblog.tumblr.com/post/693935926/earlysunsetsovermonroeville-alexa-chung-and-her

He may not be her biological father. Asian features of very strong and she doesn't have any.

Her brother has dark had and Asian eyes, but she doesn't have any Asian features. I wonder if her father is biologically related to her.