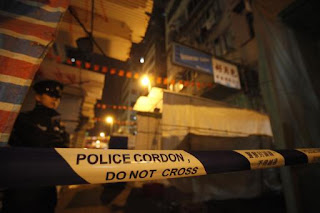 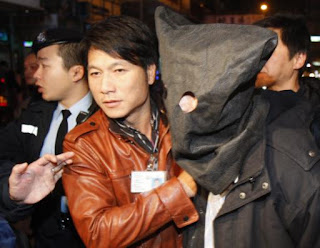 Photos: RTHK
This is certainly not what you want to read if you live in Hong Kong...

Since 2008 there have been 6 'acid attacks' in Hong Kong in which corrosive liquid has been thrown at people minding their own business walking down the street.

In the latest attack, thirty people were injured. The attack place in the crowded Temple Street night market at 9:30 pm, a time when the street would have been especially crowded. Emergency services were dispatched but the culprit remains at large. No word on what the liquid thrown was, but it was dangerous enough for the victims to have to go to hospital.

What a shocking and scary incident - especially as it might be just the latest in a series of attacks. I truly hope the person responsible is caught quickly.

In a new development, RTHK is reporting that police have arrested a suspect who was found hiding on a rooftop near the scene of the attack where several plastic bottle caps were also found.

Hardly scary, and its rather dumb too in that oh cripes there is a nut who is throwing acid off the tops of buildings in Mongkok... Um so why not go shopping else where?

Hong Kong is the home of clone shopping malls, the MK computer centre is replicated in SSP and also on HK Island. The ladies market is replicated all over NT in that you can buy fake DVDs watches and such like anywhere you want.