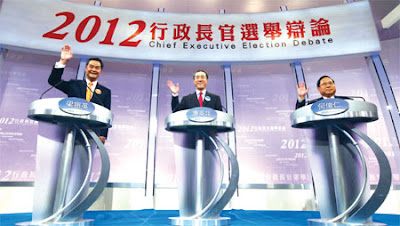 Whilst Hong Kong society is generally far more liberal than China, there is still along way to go before we have democracy in any meaningful sense of the word.

Hong Kong's people are not allowed to directly elect their own chief executive (CE), the title given to the de facto mayor. Instead, voting is by a 1,200-member Election Committee composed largely of business elites who take their cue from Beijing. The selection of the winner, already vetted by Beijing, is practically preordained; the system effectively prevents a pro-democracy candidate from taking office.

Source: TIME
Posted by burntbreadboy at 10:20 am

On the plus side,the pig didnt win and nor did that funny looking short cartoony bloke on the right that looks like film director Wong Jing